The Kamloops Snowmobile Association (KSA) is an active club that would love to show you around our beautiful area. If you are a local resident and have not yet joined the KSA, we encourage you to do so and "Join the Fun". Due to our central location, the Kamloops area represents a unique opportunity for snowmobilers. We have access to all varieties of terrain from easy trails visiting lakes and high meadows, to steep and deep powder mountain riding. We have it all within an hour of all the facilities Kamloops can provide.

The KSA has Stewardship Agreements covering two major riding areas each with a number of trails. Please note all snowmobile trails in the Kamloops area are combinations of inactive unplowed forest industry roads and snowmobile recreation trails. Riding snowmobiles on active forest industry roads is extremely dangerous and strictly prohibited by law. The Tod Mountain (Sun Peaks) area snowmobile trails, and the Tranquille Lake/Porcupine Ridge area snowmobile trails both have shelters, groomed trails and designated staging areas. Membership or a valid Daily Trail Pass is required as per our Stewardship Agreements. The money from the memberships and trail passes go directly back into the grooming and maintenance of the trail systems and shelters. 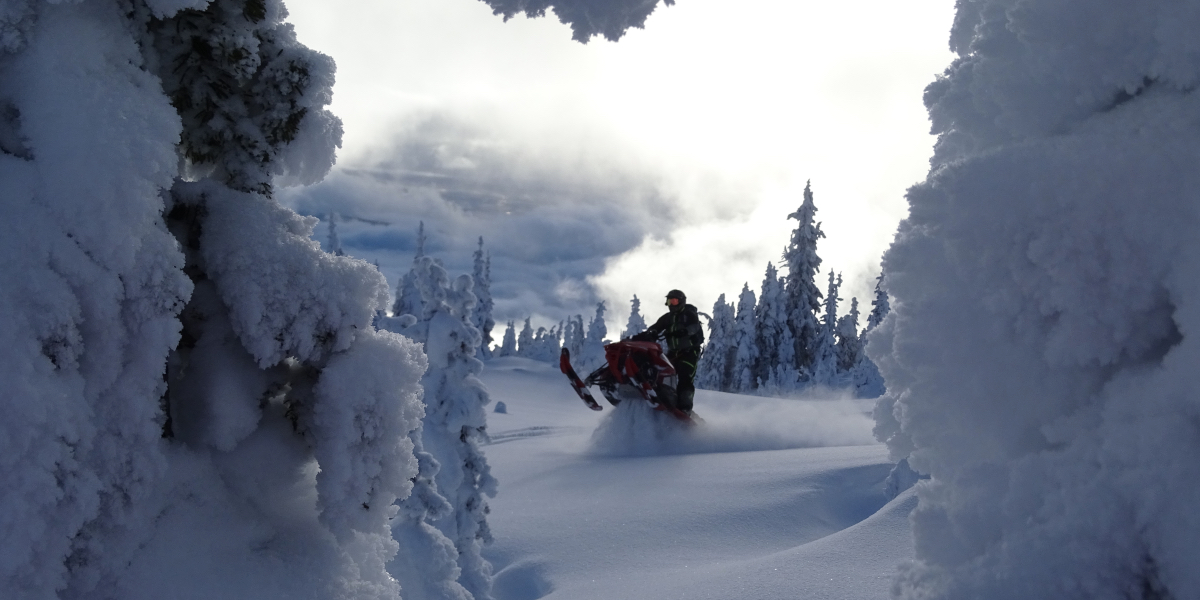 The KSA would like all members, new and old , that haven't had the chance to ride the Tranquille Riding Area to take advantage of our Trail Ambassador Program headed up by long time KSA Member Lyle Lagasse. Lyle is available any time during the week/weekend to give people who are not familiar with the area, guided tours of the many trails listed on the maps in and around the Porcupine Meadows Park.

All that is required for this ride is a phone call to Lyle, a good running snowmobile, and a valid membership to the KSA. If you are a visitor to the area, or just want to explore the area for a day and not a member of the KSA, all you need is a valid Daily Trail Pass which can be purchased from Lyle.

Public access to the snowmobile trail system is through the Sun Peaks ski area village (follow the signage to Snowmobiler Parking), 45 minutes drive from Kamloops.  This area is managed under agreement with the KSA and Recreation Sites and Trails BC (RSTBC) in cooperation with Sun Peaks.  Near the Sun Peaks village there are boundaries which must be respected and obey all signage.  The trails system extends from McGillivray Lake (1400m) to the south to Mt Leslie (1835m) to the north.  There are boundaries marked in the southern alpine on Tod Mountain defining the operational area of the Sun Peaks ski area, these must be respected.  The KSA maintains a shelter on the western flanks of Cahility Mountain.  Trails are groomed by Sun Peaks Adventure Tours.  Trails are made up of unplowed forest industry roads and recreation trails.

KML File - For use with Google Earth

GPX File - For use with your GPS receiver

GeoReferenced PDF - For use in your favorite program or you can download the free Avenza PDF Maps app on your smartphone to see where you are on the map, like a GPS.

​Porcupine Meadows Provincial Park is accessible by snowmobile only from December 15th to April 15th annually.  No other motorized access is allowed at any time.  The area is accessed (40 minutes drive from Kamloops) from the KSA (Kamloops Snowmobile Association) Chalet at 31.5km on Sawmill Main FSR (obey all signage) and through the Tranquille Lake area on trails groomed by the KSA.  Trails within the Porcupine Meadows Park are not groomed by agreement.  This area is managed under agreement with the KSA, MoTSA (Ministry of Tourism, Sports and the Arts) and BC Parks.  Trails outside of the Porcupine Meadows Park are comprised of unplowed forest industry roads and registered snowmobile trails.  Porcupine Meadows is the highest elevation (1790m) between Kamloops and 100 Mile House on the west side of the North Thompson River.  There are two shelters maintained by the KSA, one just outside the Park on the southern edge and an historic forestry fire lookout at the highest elevation.  Limited services including fuel and snacks are available at Wendego Lodge on Tranquille Lake during normal business hours.  You can access a  map for the Porcupine Meadows as well.

Located 20 minutes south of Kamloops, the Lac Le Jeune area snowmobile trails run generally towards the south and east of Lac Le Jeune.  The elevation is 1300m to 1680m, there are many other users in the immediate area of Lac Le Jeune that must be respected.  There are cross country ski trail systems and local residents.  This area is managed by agreement with the KSA (Kamloops Snowmobile Association) and RSTBC (Recreation Sites and Trails BC).  Once you are far enough south of Lac Le Jeune conflicts are not an issue (obey signage).  The ungroomed trail system runs through picturesque rolling plateau terrain on unplowed forest industry and ranching roads, through numerous meadow complexes, lakes and old forest fire burns.  Sightings of moose are common in this area, ice fishing is also popular.  This area is also accessed through Edith Lake and Rossmore Lake.

Located 15 minutes west and south of Kamloops off the Trans-Canada Highway, the Greenstone Mountain snowmobile trails area is unorganized.  Trails are made up of unplowed forest industry, mining and ranching roads.  Rising to 1793min elevation Greenstone Mountain was the site of a large wild fire in 2003 when much of the north side of the mountain was burned off.   This area allows access to extensive trails to the south and west including the trails of the Logan Lake Snowriders.  There are many lakes, meadows, burns and cutblocks.  Sightings of moose are common in this area, ice fishing is also popular.

​Adams Plateau is an unorganized area north of the Adams River Adams Lake and Scotch Creek, 45 minutes drive from Kamloops.  The highest elevation is Pisima Mountain (1893m), trails are unplowed forest industry roads and skidder trails.  There are natural meadow complexes and lakes.  There is a shelter in the large meadows at the head of Nikwikwaia Creek; also there is a mining cabin open for public use at the edge of the meadows in the Nikwikwaia Lake area.  This area is remote and requires at least intermediate riding ability, the trail in is usually rough, but worth the ride.

At present time Jamieson Creek just 30 minutes north of Kamloops on the west side of the North Thompson River is an unorganized area popular with Kamloops area snowmobiliers.  The area is accessed via active forest industry roads and snowmobilers gain access to trails made up of unplowed roads and recreation trails to numerous meadow complexes and lakes.  The area is isolated but easy riding.

The Harp Mountain area (summit is 2275m) is accessed through both the North Barriere Lake area 1 hour from Kamloops and Vavenby off Highway 5 north of Clearwater.  This area is managed under agreement with the Clearwater Sno-Drifters Snowmobile Club who maintain an “A” frame shelter on the mountain.  This is a remote alpine riding area of intermediate difficulty with some avalanche hazards.  It is an easy area to move around in with a difficult and an easy way to get from place to place, it is popular with families.  There is an historic range cabin along one of the southern access routes.  Great views in all directions await snowmobilers at the top of Harp Mountain.

Harper Creek is accessed through the North Barriere Lake area 50 minutes north of Kamloops on the unplowed Harper Creek FSR (Forest Service Road).  The Harper Creek FSR travels up the Harper Creek valley to the base of Granite Mountain (1950m) and Foghorn Mountain (1800m) which overlooks Clearwater.  Along the way Dunn Peak to the west dominates the skyline with Harp Mountain to the east.  The trail to the Granite Mountain area is unorganized and not well defined near the top of Harper Creek (basically deteriorates to a skidder trail).  There is a private range cabin on Granite Mountain and the Clearwater Sno-Drifters Snowmobile Club maintains a shelter in the Foghorn Mountain meadows.  There is a trail off the north side of Foghorn which leads to Clearwater.  The degree of difficulty is intermediate the area is remote.